PrevPreviousClimate despair vs. action: A false choice?
NextRocky Mountain Ecodharma Retreat Center is for all of us: A guest postNext

(By Kritee Kanko) I have been wanting to write my response to the question David Loy, our Ecodharma elder and a fellow founding board member of Rocky Mountain Ecodharma Retreat Center (RMERC), posed a few months ago in a previous RMERC blog “What is Ecodharma?“.

David clarified that Ecodharma combines the teachings of Buddhism and/or other contemplative traditions (dharma) with ecological concerns (eco). For him “Three aspects or components of ecodharma stand out … : practicing in nature, clarifying the ecological implications of Buddhism, and using that understanding to engage in the eco-activism that our situation requires.”

These three aspects are great. The issue is that most (white and privileged) people tend to think that “ecological” only means “environmental”. Ecology, from which “ecological” is derived, is the scientific discipline that points towards a fundamental interconnectedness of all species, processes and phenomena  in any ecosystem; and it sees humans as being embedded in the cyclical processes of nature. Study of ecology also acknowledges that no species, no individual or even “non-living” process fulfills just one fixed role in our planetary, local, societal or family ecosystem. As human beings and communities have multiple identities, roles and needs which are interdependent on those of others.

So what does this multiplicity and interdependence have to do with how we define Ecodharma and envision an Ecodharma center? I agree that meditating in natural environment tremendously helps activists ground their activism, go beyond self-righteousness, fear, anger, and frustration and opening up to their own innate courage, wisdom and compassion. I also deeply resonate with David in acknowledging that traditional Buddhist teachings need to shift in response to our current planetary crisis. In my view, we have also been short-selling dharma by applying it only in our individual or family lives instead of our societal issues.  What I want to add is the argument that (and I’m not the first one making it) ‘Eco’ in Eco-Dharma can not be just about environment or nature or what is defined as wilderness.

Even by any other names that are currently associated with the interface between spirituality and activism, “Sacred Activism” “Contemplative Environmentalism” “Spiritually rooted action” or “Great Turning”, it comes down to the same issue: we can’t be environmental activists/advocates without paying attention to inter-dependence and intersectionality between movements (including the idea of “One Movement” that I have explained elsewhere).

For this article, let’s first consider this: most native people in this country from whom Europeans stole the land and elsewhere in the world did (and do) not conceptualize wilderness areas as separate from humans. Wilderness is an interconnected world in which human, plants, animals, rocks, and so on were all spiritually animated. However, in 1960s, the modern conservation act in the U.S. formally defined Wilderness as areas “where the earth and its community of life are untrammeled by man, where man himself is a visitor who does not remain”. Like our theft of native land, our distorted definition of Wilderness breeds a sense of separation, both from our human sisters and brothers and more-than-human world of plants, animal, microbes, rock- and fire-people.

Second, well over half of this nation’s national parks were founded during Jim Crow. Not too long ago, a Berkeley Master’s student, Michael Starkey found that Black people worked very hard to create and maintain national parks and other forested areas but when it came to acknowledging Black people and their socio-economic realities at the time, all historians neglected them.  Starkey found that in wilderness literature (and the history of our understanding of natural environment in the U.S) spanning decades nearly all actors—whether positive or negative—are white (nah, no mention of Latinx and Asians either). He posited that we have artificially and consciously wrongfully imagine Wilderness to be created by and for white people! Both the relationships that African-Americans have felt with woods, inter-dependence and fear, have not been acknowledged. 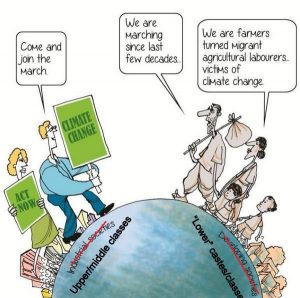 Of course, I have not even gotten to the issue that people of color and the poorest in the Global South (whom we sometimes refer to as under-served communities in the dharma world) have historically borne or will bear the brunt of ecological devastation; and are often at the forefront of the most effective spiritually-rooted activism. If one is curious, there is enormous research documenting how the most poisonous and polluted environment exists in the poorest or “lower” caste/race neighborhoods around the world. Privileged among us, including myself, can turn up the air conditioning but a mother in India or reservations in the U.S has to walk for tens of miles to get a bucket of water!

Lastly, and not the least, there is the issue of same root cause leading to multiple effects! In the light of ever-growing income inequality, it is not hard to see that at least some of the institutional drivers that militantly keep poor people poor, disenfranchised and in the most polluted environments are the same drivers that lead to exploitation and plundering of mother Earth within and outside this country. The sense of duality and separateness that makes us (both as individuals and institutions) objectify nature, other human and non-human species also makes us materialistic and causes both environmental and social-justice problems.

To fully heal one individual and restore our sense of oneness with nature, we need to also pay attention to our sense of separation to human beings from other social races/castes and economic classes. Environment doesn’t exist in isolation and we can’t heal it (or our relationship to it) in isolation. We need to collectively revisit how we define nature and how wilderness was created in this country. We need to create earnest inter-dependent communities that understand different people have different privilege and abilities. The privileged ones (those with more resources and energy) need to actively include voices that have been historically suppressed. We need to question our economic and financial systems that no longer serve the planet and most beings. Most of all we need true Eco-Dharma communities that look at both our inner (psycho-spiritual) and outer (institutional, corporate and political greed, something that David explains very well in his work) causes of our ecological predicament.

Unless the framework of Eco-Dharma acknowledges and encompasses all these inter-connections, Ecodharma in this country will become white just like wilderness and mainstream environmental movement became white in the 21st century!  My humble ask is that we confront this issue and ask if we will be able to serve well if Ecodharma becomes “White”.

Can we compassionately and skillfully face these questions at Rocky Mountain Ecodharma Retreat Center without blame guilt and/or anger? Can we make Ecodharma multi-colored (not just green and white)?

Will you join our growing community to explore these important questions?

PrevPreviousClimate despair vs. action: A false choice?
NextRocky Mountain Ecodharma Retreat Center is for all of us: A guest postNext
Join Our Email List For Advance Notice on All Events
and a Chance to Win a Free Retreat!
* All new subscribers will be entered in a drawing for a free retreat at RMERC.
Good towards any retreat in 2022; value up to $500; no cash value.